A cataract is a clouding of the lens in the eye that affects vision.

What is a Cataract?

A cataract is a clouding of the lens in the eye that affects vision. Most cataracts are related to aging. Cataracts are very common in older people. By age 80, more than half of all Americans either have a cataract or have had cataract surgery.

A cataract can occur in either or both eyes. It cannot spread from one eye to the other.

What are the symptoms of a cataract?

The most common symptoms of a cataract are:

These symptoms also can be a sign of other eye problems. If you have any of these symptoms, check with your eye care professional.

If your vision cannot be improved by changing the prescription of eyeglasses and you are limited in doing your daily routine activities such as driving, playing golf, watching television, or reading due to cataract formation, you may be a candidate for cataract surgery.

A cataract is a clouding of the normally clear natural lens inside the eye. It can be compared to a window that is frosted or yellowed. This clouding scatters the light passing through the eye resulting in blurry vision, glare or light sensitivity, poor night vision, needing brighter light to read, and/or fading of colors.

Because it is not a film over the lens, it can’t be removed with a laser or eye drops. There are no medications, dietary supplements or exercises that have been shown to prevent or cure cataracts.

Surgery is the only way to treat cataracts. Surgery involves removing the cloudy lens and replacing it with a synthetic intraocular lens (IOL). After numbing the eye, the surgeon removes the natural lens with gentle ultrasound (phacoemulsification) and replaces it with an IOL.

Once cataracts have been diagnosed and you are planning for cataract surgery you will have the ability to choose an IOL that best fits your needs. There are three general categories of IOL: 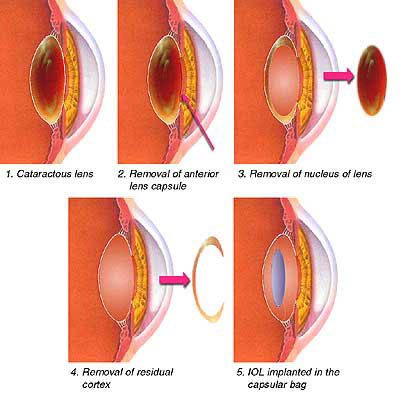 Until recently, cataract patients received standard “monofocal” lens implants that had only a single focusing power. This meant you had a choice of correction for either far or near vision. If you suffer from presbyopia like many people over the age 50, this would mean that you still need glasses for either reading or for distance vision.

The FDA has now approved several multifocal lens implants for use by certified ophthalmologists. The multifocal IOL lens can increase your chances for freedom from glasses for near, far, and intermediate vision. If you have worn glasses for many years, this might be an opportunity for you to eliminate this hassle from your life.

The FDA clinical results showed that 84% of patients who received the Alcon ReStor® lens in both eyes achieved distance visual acuity of 20/25 or better and near visual acuity of 20/32 or better after surgery without correction by contacts or glasses while only 23 percent of the conventional or monofocal control group achieved this level. Other lenses include the Eyeonics Crystalens® and AMO ReZoom® IOL.

Cataracts & Astigmatism – What are your options?

Surgery to treat cataracts is an outpatient procedure where an ophthalmologist removes the clouded natural lens during surgery and replaces it with an artificial lens. Traditionally, during surgery, the surgeon implants a monofocal intraocular lens (IOL). If you have astigmatism, however, you may still experience blurred and distorted vision because a standard IOL cannot correct corneal astigmatism. To achieve quality distance vision with a standard monofocal IOL, you may still require glasses, contact lenses, or further eye surgery such as laser vision correction.

If freedom from eyeglasses for distance vision is important to you, you have several other options, either during or after cataract eye surgery, to reduce the need for astigmatism corrective lenses, including AcrySof Toric IOL, and Limbal Relaxing Incision.

The AcrySof Toric (astigmatism-reducing) lens is a foldable lens that an eye surgeon implants during cataract surgery to replace the clouded lens. The unique design of the Acrysof Toric IOL makes it possible to eliminate or reduce corneal astigmatism and significantly improve uncorrected distance vision after surgery.

Limbal relaxing incisions are strategically placed superficial incisions placed on the peripheral cornea during surgery, causing it to relax and become more spherical and round. This allow light to focus more precisely on the retina, causing vision to become sharper and clearer. Limbal relaxing incisions takes minutes to perform and can be used alone or in conjunction with cataract surgery.